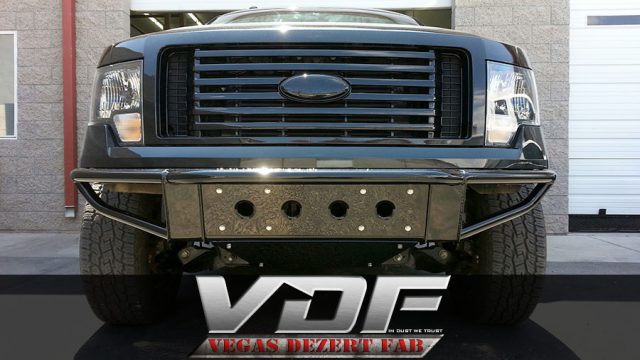 A new client of ours wanted us to fabricate a custom prerunner bumper for his 2012 Ford Ecoboost F150 4WD.

He looked as bumpers that he could order online but he liked certain things about a couple of bumpers but couldn’t decide on one. After we talked to him this was the prerunner bumper we built.

You will notice the panel with the flaired holes in it is removeable, that’s because the owner is saving up for a KCHilites 20″ LED light bar so we will mount it behind that panel and make a cut out a space for the light bar to show through.

He also wanted his bumper to be color matched, so we had World Wide Autobody do the paint work and it looks exactly like the factory color.

Another request by the client was to move his shock reservoirs so that the logo faced the correct direction…he is a stickler for details.